Posted by Unknown Posted on 7:09 AM with No comments 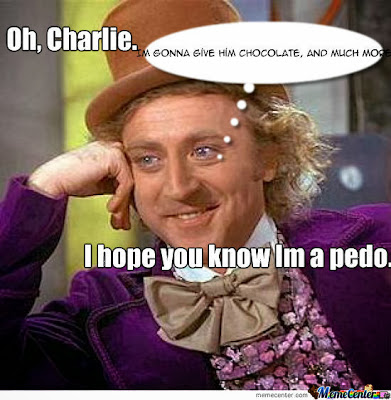 Willie of course is another word for dick.

The Filthiest Joke Ever Hidden in a Children's Movie

One of the most beloved and oft-quoted moments in the ridiculously beloved and oft-quoted film Willy Wonka & the Chocolate Factory is the sequence in which the unbalanced candymaker displays his newest invention: lickable wallpaper. As the children and their guardians go to town on the wallpaper, Wonka declares: "Lick an orange. It tastes like an orange. The strawberries taste like strawberries! The snozzberries taste like snozzberries!"

We laugh, because "snozzberries" is obviously a fanciful, fictional word, and nobody knows what they really were. Except that Roald Dahl, the book's author, knew exactly what snozzberries were: They're dicks. Snozzberries are dicks. Willy Wonka made those kids lick dick-flavored wallpaper.

It turns out the guy who thought a story about an insane recluse casually murdering a group of children had a pretty fucked up sense of humor.

In 1979, Dahl decided to revisit snozzberries in his adult novel My Uncle Oswald. The equally witty and disgusting story revolves around Oswald Hendryks Cornelius, the titular uncle and "greatest fornicator of all time." Along with his sexy accomplice Yasmin Howcomely, he devises a complicated get-rich-quick scheme that involves Howcomely seducing Europe's most famous men and then selling used condoms full of their spent semen to women wishing to birth famous progeny. Please take some time to remind yourself that this book was written by one of the world's most beloved children's authors.

The term "snozzberry" comes up when Yasmin Howcomely recounts her experience with George Bernard Shaw:

"How did you manage to roll the old rubbery thing on him?"

"There's only one way when they get violent," Yasmin said. "I grabbed hold of his snozzberry and hung onto it like grim death and gave it a twist or two to make him hold still."

"You can lead them around anywhere you want like that."

Charlie and the Chocolate Factory was written in 1964, 15 years before My Uncle Oswald revealed that the wallpaper was made to taste like the head of a penis. In the strictest sense of the term, we're pretty sure this makes Willy Wonka a pedophile. And honestly, we're not that surprised.