Home » » The world of a professional naked girl

The world of a professional naked girl

Posted by Unknown Posted on 10:42 PM with No comments 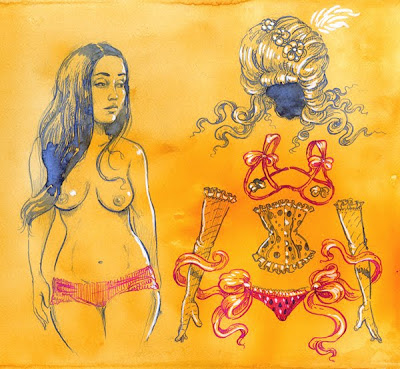 About a month ago, I was daydreaming at work and a bunch of random memories flooded into my mind. One in particular was this flash of me and an ex-gf from long ago, hanging out in the living room of the apartment we shared. I remembered how this girl, who was a dancer of sorts, could just do these faces and body movements out of nowhere, just in passing, as something intended to be a joke, that would floor me. I've always wondered how some ladies can turn this fountain of sheer, gun blast sexy power on and off, aiming it at exactly who they want, when they want. I asked my new friend, well-known artist and professional sexy lady, Molly Crabapple, to try and make sense of the ramblings I wrote her one day, and this is what she came up with.
Kelly McClure

If you keep traveling, you're going to get yourself raped."

Z. and I were sitting in a cafe on the edge of the Sahara. We'd been bumming around Morocco for three weeks. Despite my warnings, Z was increasingly disgusted with me for provoking constant street harassment. I covered myself chin to toe, but guys at the bus station would hiss at me like snakes anyway.

"That man just left a mosque," Z said, after an elderly man eye-fucked me. "He's supposed to be thinking of god."

While picking ants out of our mint tea, we struck up a conversation with two other westerners. They were wind-burned, milk-wholesome Scandinavian girls. Z told me that he bet they never had guys stalking them around Marrakech.

Turning it on and off was something I thought about when I was lying naked in a warehouse in the Bronx, surrounded by hard-boiled eggs. The man photographing me adamantly denied having an egg fetish. After the shoot was over, he'd offer them to me to bring home and eat. I was broke enough to say yes.

We showed up in their hotel rooms. We posed on their beds. We told each other who was a good guy and who was a sociopath, knowing full well that if a GWC raped us, the police would do nil. A girl I knew was working as a bondage model. The photographer threatened to kill her. She wept. He let her go. When she went to the police, they shrugged her off. The photographer later murdered a model.

Surrounded by eggs and softboxes, I was doing my best to escape the trajectory of art school-retail-professional failure that, as a broke student at a bad school, I was marked out for. I wanted to make money fast, shove it into my business and then get out of here. I was young, which meant I had nothing to interest people with besides my looks. While those held out, I wanted to use them to get other, more versatile trading tokens.

For every free coffee beauty privilege gets you, it also gets you a guy following you down the steps on the subway, saying he wants to work his tongue into your ass.

When men harrass us, they blame it on our looks.