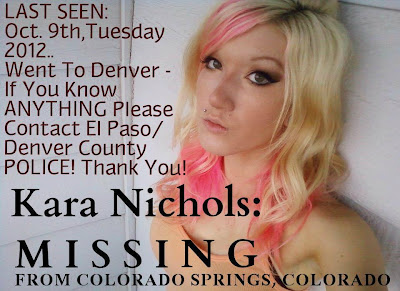 OUT IN CHI TOWN ATM BE BACK SOON!!!

My name is Kara and I'm 19 years old. I've been modeling since February 2012, and although I'm new to it modeling is something I am very passionate about and I take my work seriously. Currently I'm working on building my portfolio so I'm always looking for modeling opportunities in my area. I've done mostly lingerie shoots so far but I'm extremely open minded and I'm willing to work with you on ideas for shoots so contact me if you're interested in working with me!

***NOTE TO PHOTOGRAPHERS- due to my financial situation I am mainly focused on paid work. I am still open for TF shoots but paid work takes priority for now. Please contact me for serious requests only

Colorado police said a recent online escort ad, featuring a photo of Kara Nichols, was not placed by the 19-year-old aspiring model who disappeared nearly seven weeks ago.

"Our investigators became aware of that posting and followed up on that lead. They were able to determine that someone else had used the photos of Kara for their own ads. Kara was not involved in posting the ads or with those folks. Someone simply grabbed those photos online and used them for their own purposes," El Paso County Sheriff's Office Lt. Jeff Kramer told The Huffington Post.

The picture was recently discovered by police on a Las Vegas-based escort website. Other sites ran stories suggesting Nichols could be working as a prostitute.

Neither, however, turned out to be the case.

"It is not uncommon at all for these escort-type businesses to fish around the internet and find photos of other folks to use for their advertisements," Kramer said.

In regards to Nichols' disappearance, Kramer said police are still following up on leads. "We are continuing to identify a number of people who knew Kara or are friends with her," he said.

Nichols was last seen in Colorado Springs on Oct. 9, the same day as the last call from her cell phone at 11:45 p.m.

Police said Nichols was traveling to Denver for a modeling job with two unidentified women. It is unclear if she arrived and her current whereabouts are a mystery.

Police have interviewed one of the women traveling with Nichols, but have not released her name, an they are still looking for the second woman.

According to Nichols' Facebook page and Model Mayhem profile (NSFW), she has been modeling since February 2012.

"Although I'm new to it, modeling is something I am very passionate about and I take my work seriously," her profile reads. "Currently I'm working on building my portfolio so I'm always looking for modeling opportunities in my area."

Kara Nichols' is a white female, 5-foot 8-inches tall, 120 pounds, with blond hair and green eyes. Her family has launched the Help Us Find Kara Nichols Facebook page to help spread the word online. Anyone with information about Nichols’ whereabouts should call Detective Cliff Porter at (719) 520-7227.