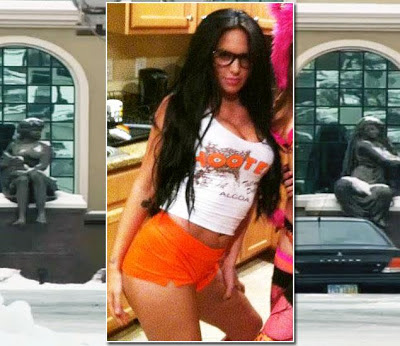 A Cleveland stripper is in critical condition after tumbling over a 15-foot balcony at a gentlemen’s club while giving a lap dance.

The accident occurred Wednesday at 12:40 a.m. at Christie’s Cabaret when stripper Lauren Block, 22, was giving a private dance to Pasquale Storino, 25, on the second floor of the nightclub.

According to the police report, Block fell while performing an elaborate series of moves on Storino.

“He stated that she grabbed the rail, as he was facing away from the balcony, and she tried to complete some sort of dance jump/dance move, and accidentally went head first over the rail,” the police report stated.

Witnesses described Block as lying motionless on the ground below the balcony, her face covered in blood. She was rushed to MetroHealth Medical Center, where she remains in critical condition with a severe head injury.

Police are not continuing to investigate the accident.

With locations in seven different cities, Christie’s Cabaret bills itself on its website as “America’s fastest growing chain of gentlemen’s clubs in America” and boasts that “each location features state of the art sound and lighting.” 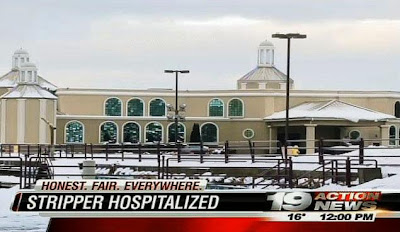 A Cleveland stripper was gravely injured early today when she plunged 15 feet while reportedly trying to “complete some sort of jump/dance move” while giving a lap dance to a customer, police report.

Lauren Block, 22, tumbled from the second floor of Christie’s Cabaret around 1 AM, according to a Cleveland Police Department report. Block, seen at right, fell headfirst over a rail and suffered “major head trauma,” cops noted.

Officers initially thought that Block may have been thrown off the club’s balcony. But they subsequently determined that it was a bizarre accident.

While cops investigated inside the club, they were approached by Pasquale Storino, 25, who said that he was “receiving a lap dance” from Block when she “grabbed the rail…and tried to complete some sort of jump/dance move.” Storino, who said he was facing away from the balcony, added that Block “accidentally went head first over the rail.”

According to his Facebook page, Storino is a Point Pleasant Beach, New Jersey native who attends Seton Hall University’s law school. He did not respond to a message left on his voicemail.

Witnesses told police that after Block fell from the balcony, “two unknown males fled the bar.” While cops were trying to locate the “possible suspects,” Storino spoke to officers and “said that they were on the 2nd floor and he was receiving a lap dance” when the accident occurred.

Police are not continuing to investigate the mishap. Block is pictured above in a Halloween 2012 photo showing her dressed as a Hooters waitress. (2 pages)