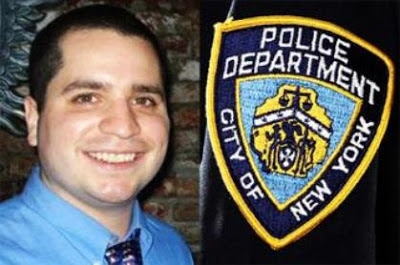 Son of Son of Sam?

A New York City police officer allegedly plotted to kidnap up to 100 women, roast them in his oven or over a fire, and eat them, federal authorities said.

According to a criminal complaint, Gilberto Valle, an active New York Police Department officer, discussed "kidnapping, cooking and eating body parts of women" with an with an unnamed witness.

The duo allegedly discussed using chloroform to knock their prey out, then bring them back to 28-year-old Valle's kitchen, where the officer said he had a big enough oven "if I folded their legs."

Slow cooking her on a spit over an open fire or roasting her alive in a cage were also considered.

Valle, who was reportedly stationed in Harlem, was arrested on Wednesday at his home in the New York borough of Queens.

The co-conspirator, who has not been identified, was not charged and there was no further detail about the individual or others involved.

The US attorney's office for Manhattan said referred to multiple co-conspirators.

No women were harmed, but FBI acting assistant director Mary Galligan said the stomach-churning allegations were beyond comment.

"The allegations in the complaint really need no description from us. They speak for themselves," she said. "It would be an understatement merely to say Valle's own words and actions were shocking."

The FBI learned about Valle's plan in September when it found that he'd spent months discussing details on emails and instant messages from his home computer, according to the complaint.

A search of his computer allegedly revealed files kept on at least 100 women, each with a name and photograph and often personal details such as address and descriptions.

Valle is said to have illegally used law enforcement databases to draw up a target list of women.

Then he concocted a "plan to abduct and cook an identified woman, researching methods of disabling and drugging women, and agreeing with at least one other individual to kidnap a woman in exchange for a sum of money."

During one online conversation that took place in July between Valle and the unidentified co-conspirator, the complaint says, Valle was asked: "How big is your oven?"

Valle allegedly answered: "Big enough to fit one of these girls if I folded their legs."

Further discussing the culinary aspects of the plot, the co-conspirator allegedly asked Valle what his "favorite cut of meat" was and advised against using a spit over a fire.

"Spitting kills the girl. Have to put her into a kind of cage," the co-conspirator wrote.

"I was thinking of tying her body onto some kind of apparatus," Valle allegedly responds. "Cook her over a low heat, keep her alive as long as possible."

Although no murders took place, Valle allegedly went as far as meeting one of his intended victims. The co-conspirator asked him "How was your meal?" to which Valle is alleged to have replied: "I am meeting her."

The ghoulish meeting took place, the FBI says, in a restaurant.

According to the complaint, Valle was preparing to do the kidnapping, for which the co-conspirator promised to pay him $5,000 a victim.

"This is very risky and will ruin my life if I'm caught," he allegedly wrote. "I really need the money and I can't take under $5,000."

"This case is all the more disturbing when you consider Valle's position as a New York City police officer and his sworn duty to serve and protect."

Valle faces up to life in prison if convicted on a kidnapping conspiracy charge and five years if found guilty of illegally accessing an official computer.

Despite the horror movie quality to the alleged plot, online news watchers were quick to start cracking jokes.

On The Daily Beast, one reader referred to the NYPD's mission to protect and serve, then quipped that Valle was "taking the second part seriously."