The Worst Part of Legalized Prostitution

Posted by Unknown Posted on 11:20 AM with No comments 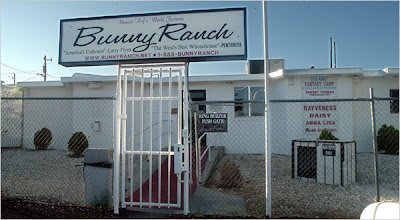 The Mustang Ranch brothel was owned, operated and pimped by the president of the United States Sir George HW Bush Knight of the British Empire who has a long personal history of sex slavery as does the current US government

The worst part of legalized prostitution is the government and corporations FORCING women (and men?) to become prostitutes and sex slaves...which is something governments have a lot of experience with. Ask Jeff Gannon.

Pimps and hookers agree, if you want legalized prostitution without government interference, and elimination of the federal income tax, vote for Ron Paul for president.


'If you don't take a job as a prostitute, we can stop your benefits'

A 25-year-old waitress who turned down a job providing "sexual services'' at a brothel in Berlin faces possible cuts to her unemployment benefit under laws introduced this year.

Prostitution was legalised in Germany just over two years ago and brothel owners – who must pay tax and employee health insurance – were granted access to official databases of jobseekers.

The waitress, an unemployed information technology professional, had said that she was willing to work in a bar at night and had worked in a cafe.

She received a letter from the job centre telling her that an employer was interested in her "profile'' and that she should ring them. Only on doing so did the woman, who has not been identified for legal reasons, realise that she was calling a brothel.

Under Germany's welfare reforms, any woman under 55 who has been out of work for more than a year can be forced to take an available job – including in the sex industry – or lose her unemployment benefit. Last month German unemployment rose for the 11th consecutive month to 4.5 million, taking the number out of work to its highest since reunification in 1990.

The government had considered making brothels an exception on moral grounds, but decided that it would be too difficult to distinguish them from bars. As a result, job centres must treat employers looking for a prostitute in the same way as those looking for a dental nurse.

When the waitress looked into suing the job centre, she found out that it had not broken the law. Job centres that refuse to penalise people who turn down a job by cutting their benefits face legal action from the potential employer.

"There is now nothing in the law to stop women from being sent into the sex industry," said Merchthild Garweg, a lawyer from Hamburg who specialises in such cases. "The new regulations say that working in the sex industry is not immoral any more, and so jobs cannot be turned down without a risk to benefits."

Miss Garweg said that women who had worked in call centres had been offered jobs on telephone sex lines. At one job centre in the city of Gotha, a 23-year-old woman was told that she had to attend an interview as a "nude model", and should report back on the meeting. Employers in the sex industry can also advertise in job centres, a move that came into force this month. A job centre that refuses to accept the advertisement can be sued.

Tatiana Ulyanova, who owns a brothel in central Berlin, has been searching the online database of her local job centre for recruits.

"Why shouldn't I look for employees through the job centre when I pay my taxes just like anybody else?" said Miss Ulyanova.

Ulrich Kueperkoch wanted to open a brothel in Goerlitz, in former East Germany, but his local job centre withdrew his advertisement for 12 prostitutes, saying it would be impossible to find them.

Mr Kueperkoch said that he was confident of demand for a brothel in the area and planned to take a claim for compensation to the highest court. Prostitution was legalised in Germany in 2002 because the government believed that this would help to combat trafficking in women and cut links to organised crime.

Miss Garweg believes that pressure on job centres to meet employment targets will soon result in them using their powers to cut the benefits of women who refuse jobs providing sexual services.

"They are already prepared to push women into jobs related to sexual services, but which don't count as prostitution,'' she said.

"Now that prostitution is no longer considered by the law to be immoral, there is really nothing but the goodwill of the job centres to stop them from pushing women into jobs they don't want to do." 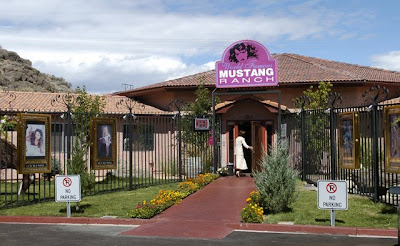 The new Mustang Ranch is back in business, this time without government pimps
Share this article :
Labels: prostitution, sex slavery