Posted by Unknown Posted on 7:49 PM with No comments 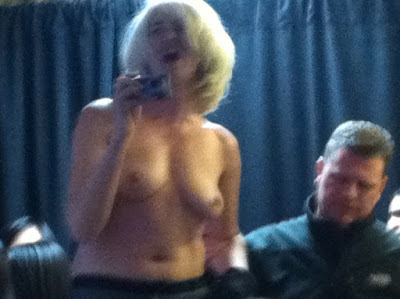 What's the only thing more exciting than a new Core i7 MacBook Air at your local Apple Store? No, not the Genius Bar helping you out with a cracked iPhone screen—a ranting, pot-smoking lunatic crashing a Q&A. Naked.

Star actor in USA's White Collar, Matt Bomer (above, displeased, repulsed), decided to stop by the SoHo Apple Store for a casual Q&A with his fans. Simple, right? Kiss a few iMacs, sign some iPad sleeves, smile for the camera, answer questions about White Collar, such as "Matt, what's the best part about being an actor?," and "Matt, why are you at the Apple Store to begin with?" But no—this wouldn't be any ordinary Q&A for Mr. Bomer. A crazed pothead with an agenda stormed the stage. Here's an account of the harrowing boob flash, relayed by a shellshocked Apple Store patron and Tumblr enthusiast:

Cristen and I sat in the back on the side. This older blonde woman with a drawn on mustache sat next to Cristen, and she REEKED of marijuana.

Midway through the thing, she TAKES OFF HER TOP, stands on a chair, completely topless, and starts screaming about how she is the naked paparazzo and how we should all go visit her website and see her drag queen friends perform blahblahblah.

Cristen was hiding in my lap because this lady was right next to her, and Matt Bomer had this insanely giddy grin on his face and is squealing THIS IS THE BEST THING TO HAVE EVER HAPPENED IN MY CAREER!!!!!!!!

He also proceeded to bring it up at every chance he possibly could throughout the rest of the night.

No word on what happened to this deranged computer user, whether she purchased an iTunes card before being escorted out of the store (we assume?), or whether she brought with her any iPad 3 rumors.

But still! Drag queens. Intel processors. Naked paparazzo? Matt Bomer. There are no nouns missing from this experience—and I can only hope it's not confined to ONLY IN NYC, MY FRIENDS. Check out your next local iPhoto workshop for a chance to learn, and maybe see a naked woman. [Thanks, Rudey]

Update: It has been brought to our attention that the man depicted above is not, in fact, Matt Bomer, but some other rightfully repulsed dude.
Share this article :
Labels: ipod