Posted by Unknown Posted on 11:28 AM with No comments 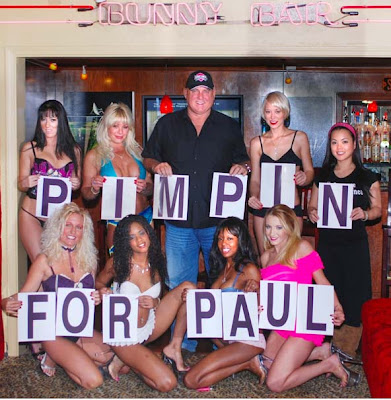 Pimps and hookers for Ron Paul

"In essence, if I leave it to the states, it's going to be up to the states. Up until this past century, you know for 100 years, they [prostitution, gay marriage, drugs, raw milk] were legal. What you're inferring is 'You know what? If we legalize heroin tomorrow, everybody is going to use heroin.' How many people here would use heroin if it was legal? I bet nobody would."
-Congressman Ron "I've Seen More Pussy Than JFK" Paul, MD OBGYN who delivered 4,000 babies, Republican Party candidate for president of the United States in 2012, Libertarian Party nominee for president in 1988

On the eve of the Iowa caucuses, Rep. Ron Paul just scored a big endorsement. “After polling all the girls,” says brothel owner and star of HBO’s Cathouse, Dennis Hof, The Moonlite Bunny Ranch has endorsed Ron Paul for president.

(The above picture was actually taken when the group endorsed Paul four years ago, but the 2012 endorsement is new.)

Though the group backed Paul four years ago, it was not a forgone conclusion they would endorse him again. “We thought real closely about supporting [Newt] Gingrich — because he’s a cheater — and we like cheaters,” said Hof.

Ultimately, though, they worried he might cheat on them.

And so, Hof organized a meeting of over 500 girls. “A lot of them supported Obama last time,” he said. But because he signed a bill allowing for human consumption of wild horses … the girls (who — after all — live on a ranch) don’t want any part of Obama.”

All politics is local, and unlike other states, Nevada (the “BunnyRanch is just outside of Carson City) allows its counties to license brothels. This is a point that surely impacted Hof’s decision to back Paul: “We decided to go with the guy that’s more about state’s rights — and that’s Ron Paul,” he said.

While most endorsements only benefit the candidate, Hof tells me this one comes with a special deal. During the month of January, he said, the ranch is offering two bunnies for the price of one. All you have to do is come in and say: “I”m pimping for Paul.”