Posted by Unknown Posted on 8:15 AM with No comments 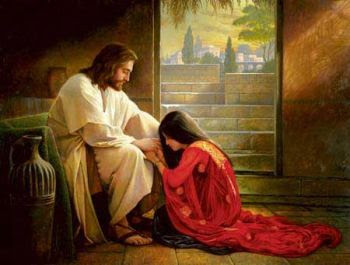 Ask her to marry you!

"And the companion of the savior was Mary Magdalene. Christ loved Mary more than all the disciples, and used to kiss her often on her mouth. The rest of the disciples were offended by it and expressed disapproval. They said to him, 'Why do you love her more than all of us?' The Savior answered and said to them, 'Why do I not love you like her?'"
-Gospel of Philip 63.34-36, Holy Bible

'Mary Magdalene was one of Jesus' most celebrated disciples, and the most important woman disciple in the movement of Jesus.[3] Jesus cleansed her of "seven demons", [Lu 8:2] [Mk 16:9] conventionally interpreted as referring to complex illnesses.[4] She became most prominent during his last days, being present at the cross after the male disciples (excepting John the Beloved) had fled, and at his burial. She was the first person to see Jesus after his Resurrection,[3] according to both John 20 and Mark 16:9. Mary Magdalene is considered by the Catholic, Orthodox, Anglican, and Lutheran churches to be a saint, with a feast day of July 22. The Eastern Orthodox churches also commemorate her on the Sunday of the Myrrhbearers. Pope Gregory the Great's homily on Luke's gospel dated 14 September 591 first suggested that Mary Magdalene was a prostitute: "She whom Luke calls the sinful woman, whom John calls Mary, we believe to be the Mary from whom seven devils were ejected according to Mark. And what did these seven devils signify, if not all the vices? ... It is clear, brothers, that the woman previously used the unguent to perfume her flesh in forbidden acts."(homily XXXIII) This identification of Mary Magdalene as a prostitute was followed by many writers and artists until the 20th century. Even today it is promulgated by some secular and occasional Christian groups. It is reflected in Martin Scorsese's film adaptation of Nikos Kazantzakis's novel The Last Temptation of Christ, in José Saramago's The Gospel According to Jesus Christ, Andrew Lloyd Webber's rock opera Jesus Christ Superstar, Mel Gibson's The Passion of the Christ, Jean-Claude La Marre's Color of the Cross and Hal Hartley's The Book of Life. It was because of this association of Mary as a prostitute that she became the patroness of "wayward women", and "Magdalene houses" became established to help save women from prostitution.'
-Wikipedia

"Also they [the Cathars] teach in their secret meetings that Mary Magdalene was the wife of Christ. She was the Samaritan woman to whom He said, 'Call thy husband.' She was the woman taken into adultery, whom Christ set free lest the Jews stone her, and she was with Him in three places, in the temple, at the well, and in the garden. After the Resurrection, He appeared first to her."
-Ermengaud of Béziers, Treatise against Heretics

"I think it's entirely plausible to think that Jesus may have been married. It was a normal practice for Jewish men. It would also be normal not to mention that he had a wife."
-Dr Karen King PhD, Harvard University Professor

"The sacred union of Jesus and his Bride once formed the cornerstone of Christianity….the blueprint of the Sacred Marriage, that the later (church) builders rejected, causing a disastrous flaw in Christian doctrine that has warped Western civilization for nearly two millennia."
-Margaret Starbird, The Goddess in the Gospels

"She walks upon our meadows green, the Lamb of God walks by her side, And (in) every English Child is seen, children of Jesus and his Bride."
-Song of Jerusalem, by William Blake

"I know a guy who kept whores and 12 losers around, and the jews crucified him too."
-William Shatner, Charlie Sheen Roast 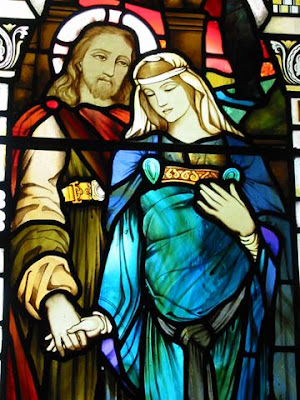 BLOODLINE OF THE HOLY GRAIL - Jesus with a pregnant Mary Magdalene at Church of Mary Kilmore Church (Caell Muire) in the village of Dervaig on the Isle of Mull in Scotland where Jesus and Mary allegedly spent their retirement years in wedded bliss. John Martinus was believed in the early Christian Period to be the last son of Jesus by Mary Magdalene, born on the Scottish Isle of Iona. Britain was the first nation to officially adopt Christianity. The stained glass window reads: "Mary hath chosen that good part, which shall not be taken away from her" from Luke Chapter 10 Verse 38-42, Holy Bible
Share this article :
Labels: jesus christ merry christmas, rosslyn chapel