Posted by Unknown Posted on 4:33 AM with No comments 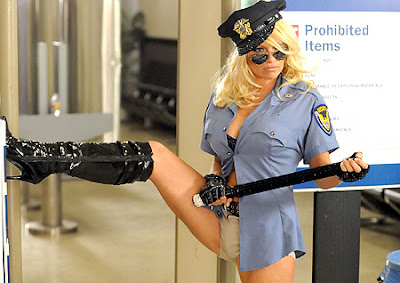 I got plenty of spankings at school but apparently they were doing it wrong...
Mother sent stripper to schoolboy's classroom as birthday treat

Most parents like to pull out all the stops to make a child's 16th birthday as memorable as possible.

But having a female stripper surprise your son in front of his teacher in class would not feature on many wish-lists.

Yet that's what happened when one woman booked a special performer for her son's big day.

She stipulated that the surprise take place in drama class - and even asked the teacher to film it so the family could see the boy's reaction.

But - thanks to what has been put down as a booking error - a female stripper turned up in place of the gorilla-suited man the unnamed mother had apparently asked for.

The stripper, who arrived on cue halfway through the lesson, first walked the birthday boy around the classroom on all fours.

Then, gyrating to the sounds of Britney Spears, she spanked him before stripping down to her bra and knickers and insisting the "naughty" schoolboy rub cream all over her body.

At that point, the teacher - who had not been told what the surprise would entail - called an immediate end to the show.

The pupil's mother has told them she was the victim of a booking error.

Classmates refused to name the boy, claiming they had been told to stay quiet by teachers who insisted he was "already in enough trouble".

But one teenager, who witnessed the show, said: "It happened just before lunch when we were in drama class, discussing our GCSE coursework.

"The teacher suddenly announced: 'Something is about to happen'.

Then a woman in a very short skirt walked in dressed as a copper.

"She asked the lad to stand up, which he did, and told him he had been a very naughty boy because he hadn't been doing his homework.

"Then she put on some Britney Spears music and got out a collar and lead from her bag and told him to put them on.

"No one could believe it. Next she ordered him to get on all fours, led him around the classroom and hit him 16 times - one for each year - on the bottom with her whip.

"Then she took off some clothes until she was down to her bra and pants, pulled out some cream, put it on her buttocks and told him to rub it in.

"To be fair to the teacher, you could tell she was just stunned - and when the cream came out she told the stripper: 'That's it. That's enough'."

The teenager said the boy ran out of the classroom while the stripper calmly packed her bag and left.

"Everyone was in a state of shock," added the source.

"Apparently the boy's mum arranged the whole thing. But all she wanted to do was embarrass him with a little bit of fun.

"She thought she had booked something like a gorilla to chase him around the classroom. She certainly didn't expect anything like this.

"Apparently minutes before the stripper turned up the mum told the teacher something was going to happen and gave her a camera to film it all."

A spokesman for the school would only say yesterday: "There was an incident, we are aware of it, and it is being dealt with."

No pupils have been suspended and police officers are not involved.

He said: "If this happened in front of the kids then it's outrageous. We get kids ringing up now and again, but we always say no.

"Sometimes someone will say they want something for their teacher, but when we ask for written permission they don't call back."


"I ordered a GORILLA...yeah, that was it." Good acting!
Share this article :