Posted by Unknown Posted on 7:28 AM with No comments 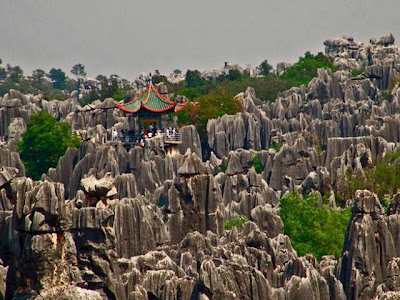 Kunming, the capital of Yunnan Province, enjoys great fame among tourists not only because the region features a consistently warm climate, but also thanks to its wonderful vistas and landscapes. Among the most dramatic of these attractions is the Stone Forest (Shilin), known since the Ming Dynasty (1368-1644 A.D.) as the 'First Wonder of the World.'
08 more images after the break... 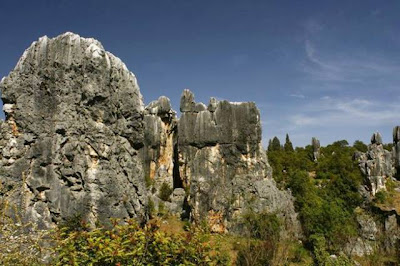 The Stone Forest is in Lunan Yi Nationality Autonomous County, which is about 120 kilometers (75 miles) from Kunming and requires only a three-hour drive. It covers an area of 400 square kilometers (96,000 acres) and includes both large and small stone forests, as well as many other scenic spots. An old local saying says that 'If you have visited Kunming without seeing the Stone Forest, you have wasted your time.' Truly, the Stone Forest is one of the most important attractions of Yunnan. Walking through the Stone Forest, visitors marvel at the natural stone masterpieces and are bewitched by the intricate formations. The magnificent, strange and steep landscape creates countless labyrinthine vistas, including: 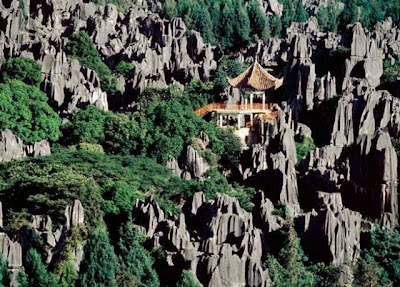 Major Stone Forest, Minor Stone Forest and Naigu Stone Forest, all of which feature stones in various formations. Animals, plants, and even human figures can be found here. Some are elegant, some are rugged, and each is lifelike with its own distinguishing characteristics. Subterranean Stone Forest in Zhiyun Cave, an underground stone forest distributed among several caves and occupying a total area of about three square kilometers (720 acres). Strange Wind Cave, composed of Penfeng Cave, Hongxi Spring and an underground river. From August to November, gales lasting two to three minutes sweep out of the cave every 30 minutes. 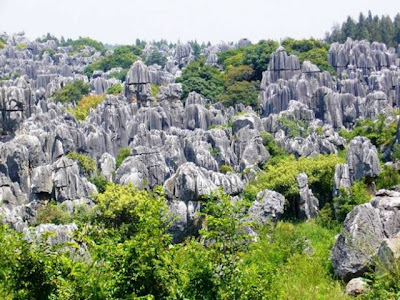 Long Lake is a karsts lake that is three kilometers (two miles) long but only 300 meters (zero point two miles) wide. The lake features underwater stalagmites and stalactites and a small island in the center of the water. The source of the Dadie Waterfall, Ba River, is a branch of Nanpan River. In the rainy season, up to 150 cubic meters (196 cubic yards) of water per square inch plummet down the 88 meter (288 feet) drop. Geologists say the Stone Forest is a typical example of karsts topography. Approximately 270 million years ago - during the carboniferous period of the Paleozoic era - the region was a vast expanse of sea. Over time, the movements of the lithosphere gradually caused a retreat of the waters and the rise of the limestone landscape. Due to constant erosion by the elements, the area finally developed into the present-day Stone Forest. 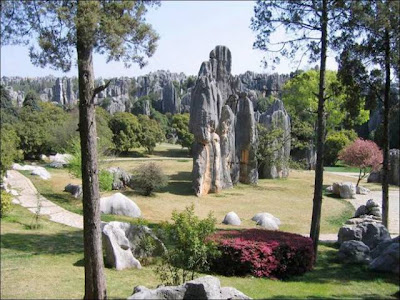 Many beautiful legends originate in this magical place, passed along by the native people known as Sani, a branch of the Yi ethnic group. One particular story about the faithful love of Ashima, a beautiful, clever and warm-hearted Sani girl, is the most popular and has been told for thousands of years. The Sani people celebrate their national festival - the Torch Festival - every lunar year on June 24. They take part in traditional performances such as wrestling, bull fighting, pole-climbing, dragon-playing, lion-dancing and the A-xi Moon Dance. During this time, the Stone Forest is alive with a particularly joyful, festive atmosphere, making the area even more attractive than usual. However, the Stone Forest - with its sculptures engraved by nature, herself - is always a true miracle for visitors to behold. 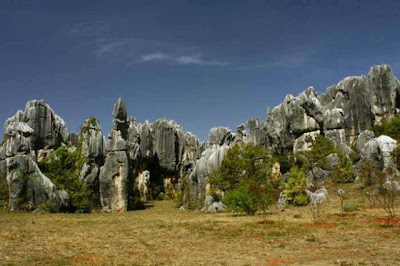 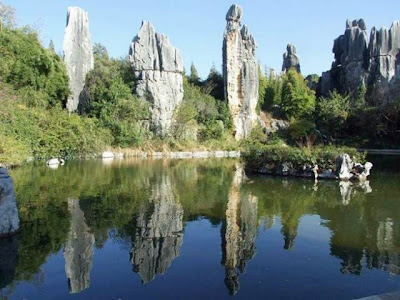 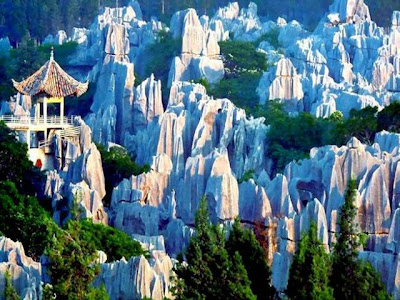