Posted by Unknown Posted on 4:20 AM with No comments Scandalous! Shocking! Without modesty! Nudity has been portrayed without shame throughout history and has been met with varying criticism depending on the time and culture.
Early Nude Art
Ever since early cave paintings the natural human form has been portrayed in its full unclothed glory. This was just how the artists saw his fellow people, and depending on the region, people wore very little anyway. Since then societies have presented the nude form in paintings, drawing, photography, and any other media. This either demonstrates humanity's strong sexual nature, or just a propensity for making aesthetically pleasing artwork, or perhaps a combination of the two.
Perhaps no society was more naked in its art than Pompeii. This ancient Roman city would meet its doom at the wrath of Mount Vesuvius when the volcano erupted and wreaked havoc on the city below. The city would be covered and ruined by the lava flow but an 18th century find would uncover remnants of a forgotten world, including the remains of many of its inhabitants exactly how they met their fiery demise.
The society shows no sign of bashfulness in its many frescoes and surviving statues. In them you'll find depicted sexual acts, more sex, sex, and just plenty of nudity. Being an ancient Roman city, they often depicted gods and goddesses in their art. The most risque probably being Priapus, the god of fertility. Also of interest are the many statues from early Pompeii, which today may raise a few eyebrows. These are no Michelangelo's "David," if you know what I mean.
Erotica 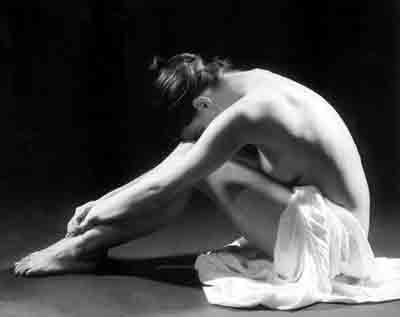 Further through art history, namely long after the invention of oil painting and when art drifted away from a dominant religious tone, nudity was a common thing. Retouching on the ancient themes, pederasty in Roman mythology in paintings and sculpture, carnal love, and in general sexuality (sometimes not so delicate) were painted time and again. This was perceived usually as good taste. Of course, that wasn't always the general consensus.
In Michelangelo's career, he painted the human form realistically and without apologies. The subtle homo-erotic tones of the Sistene's ceiling probably went straight over the head of the pope and any other religious leader for that matter. The musculature of the male form painted in detail and the poses of the many male figures probably would have been omitted from a religious painting. The olives resembling certain parts of anatomy were perhaps there as a joke or subtle reference.
In the case of Caravaggio, his pubescent cupid displayed in "Amor Vincet Omnia" or Love Conquers All , would in these days be met with hostility, and the artist considered a pedophile. But in those days, the nude form young and old was nothing to shy from, and the boy was simply another model paid to pose. Caravaggio's painting is characteristic of his work, steering clear of the idealized subjects, instead showing a common street boy, crooked teeth and all.
Much modern debate has come over Amor's primary owner keeping the painting behind a curtain. While some say that he was embarrassed of the supposed eroticism and kept it hidden, others say that covering a painting is meant to keep it as a piece de resistance, to be uncovered only after the rest of the artwork was shown, as the best of show.
Borderline Pornography
It probably wasn't until the 18th and 19th centuries in Europe, particularly Victorian times of the 19th century when nudity in art started to seem inappropriate. In an age when even in the summer one must cover themselves with layer upon layer, and sexual matters altogether were strictly taboo, its no wonder the paintings were more G rated. This isn't to say that the subtle was absent. Take the Fragonard painting The Swing. It was also called "The Happy Accidents of the Swing." Humorously showing a glimpse up a dress, an unquestionable infidelity, and a cupid statue with a "hush" gesture all show this French painting's sexual symbolism.

Tame by today's standards, The Swing was quite sultry in its day. Going further into the beginning of the nineteenth century, Goya would make a breakthrough in erotic art and paint the first showing of pubic hair. Take "The Naked Maja" which was the complement to the Clothed Maja. Both paintings are wrapped in mystery, as to who the model is and who the intended recipient, but most people conjecture Fransisco was romantically involved with the sitter. Either way, it would get the artist into much trouble. It even got him fired from a lucrative court position, as a result of the Spanish Inquisition deeming the painting obscene.
Later we continue to have scandals resulting from a repressed mass of people. This John Singer Sargent painting called "Madame X" was originally painted with one shoulder strap off and on her arm. Mothers cover your children's eyes, they'll be scarred for life! Sargent later had to repaint the strap in it's correct position, to appease the prudish public.
In the nineteenth century, the "Father of American Painting" Thomas Eakins would be in hot water for removing the loincloth of a nude model in an art class. One of the girls promptly told her parents of such a horrible thing, which would lead to Eakins' removal from professorship at the Pennsylvania Academy. Eakins wasn't ashamed of the naked human body and frequently shot many nude photos, even posing nude himself on the other end of the camera as well. His paintings sometimes had nudity in them as well.
Subtle Undertones?
Modern photography is rife with naked forms ranging from the sexually charged to the artistic erotica. Modern advertisement also has subliminal sexual undertones for its psychological value, portraying people in borderline explicit poses and gestures in an effort to maximize effectiveness. Sex sells!
Speaking of sex selling, the paintings of Rembrandt van Rijn have been known to contain subliminal messages to reach the subconscious. The Dutch word for sex has been found in the underpaintings of several works written in large, barely visible letters. The painting of the Militia of Captain Cocq could possibly have a deep subconscious image. The shadow of a hand on the other man's crotch? Captain who? Interesting.
Modern and Contemporary Nudity
Painting in the modern day, especially at art schools involves the female nude for a variety of reasons. Besides its classical and/or romantic value, the female body is generally a good subject to paint for its curves and contours, giving the student valuable practice in form and shape. One may say that society has come a long way since Fragonard's Swing painting. But at the same time it is not that probable that a painting of a school teacher skinny dipping with his students would be generally accepted, at least not in modern America.

So times change, as well as views on sexuality, nudity, and the human body. Each society and culture has its own views, and inside each has subcultures with differing views and values, such as nudist camps. It also matters which part of the world you're from, as a nudist beach in France is more the norm than a nudist beach in New Jersey.
No matter what day and age, boys will be boys and seek the naked drawings in art books, erotically charged paintings will turn us on, subtle sexual undertones may touch our subconscious and we will always have nude paintings on our walls for whatever the perceived value.