Posted by Unknown Posted on 4:21 AM with No comments

I love traveling, not the fact of going somewhere else, but the action of traveling from one place to another. My fascination is of being anonymous, and of course the time spent “people watching”. This is often done alone, which I think is more entertaining as you are not distracted from the serious business of observing.
Two journeys this year, one to the UK and one day trip to Barcelona.

The UK bound trip started with the normal commotion I always achieve at airports. This is caused by the habit of wearing as much as I can to avoid carrying it or more to the point paying the dreaded extortionate fees “excess baggage” what an awful term...nothing I carry is excess to my needs! So off go the alarms, I could offer my services to test their equipment because no matter what I remove I always set the systems blaring. After the “pat down” with nothing found to attribute to the noise I always hear myself apologise! With the current state of the world I am not complaining about these security measures I just would like to get through, just once, without this hullabaloo!
Then homeward bound, the UK airport tempted me with Marks and Spencer food outlet just before you go through customs control. Great idea, buy lunch, and a few presents to bring back, a thought of what you are allowed to have in hand luggage I avoided drinks but settle on a sandwich, fruit, biscuits etc plus cheeses and chutneys for friends. So I discover this is a ploy by airport staff to get free lunches, they confiscated the lot. Nowhere could I see on the list of banned items M&S lunch! I wanted to say “stop let me back over the barrier and I will eat it first” but the fear of not being let through to travel was greater than hunger.
The day trip to Barcelona was just as eventful for different reasons. An unscheduled change of trains half way meant a different set of traveling companions. Sitting ourselves by the door, with an empty seat in front and two to the side, the carriage was almost full. Then, three young, smartly dressed men boarded, taking up the only empty seats. The first oddness I noticed they all wore the same jackets and had name badges so without further thought I assumed they were security or police. Then I saw the bibles they all started to read as we started out of the station. With an hours non stop journey to Barcelona in a full carriage, we start to realize that our traveling companions had a mission or should I say, they were missionaries. Within minutes they struck up conversation with us.

Caught off guard, but fascinated to understand why these three young American men were in Spain. To counter their obvious objective to discuss The Lord, we asked them many questions on their background, my friend and I taking it in turn to question them. The first thought that ran through my head was the “good cop bad cop” ploy we naturally adopted. The friend was gentle in the questioning I was not so! Why was I allowing myself to be drawn into this exchange? Not wanting my religious believes to be questioned or was I feeling confronted?
With the journey over, ahead of us the serious task of shopping. We starting walking from the station in the crowds of city folks going about their business. I could not believe what I saw next, as nobody else seemed to notice, I began to wonder if my eyes deceived me. “Did you see that”? “Was he wearing anything”? Not a pretty sight, just a man with clothes painted on his naked body. To add to the amusing spectacle...not a head was turned. Just like the earlier time in the train carriage I felt the day was going to be different, and it certainly was! 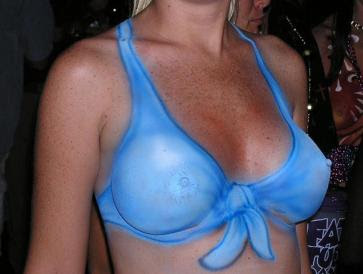 Maybe that is the reason I love traveling, you cannot control what you may encounter only how you react to it.