Posted by Unknown Posted on 7:45 AM with No comments

He's one of the world's biggest and tellest man ever, he called as Big Alton because he's from alto illinois, when he's death his weight are abouy 440 pounds and doesn't seem to stop increasing, he's born on 1918, the oldest of 5 brother, he's die in age of 22 because of the infection that caused by ankle scratched. His coffin are about a half tons!! and 12 pallbearers needed. he's buried on a solid concrete vault, his family have a fear of if his body will be intervented by the news media..

Born in america several years after her mother imigrated from norwegia, and the interesting part was his mother is as big as him with 7'2 " height!!. According to the death certificate from Mendocino Hospital, his height are 9'2 " when his death.. if this thing are right.. so he's the tallest human in the world history.. he's laid to rest in montana 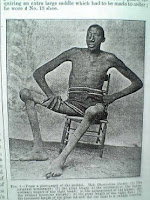 Born in 1932 on Buffalo new york, and he's famous as the big buffalo. even he got many medical treatment, he grows in a fast level. he's increase 7 inch in several month. Die in 1969, people believe he got about 9 feet tall when he's die


Born in 1971 on ukraine, he was an animal surgeon expert and he live with her mother, at this time he's listed as the world's tallest man based on Guinness Book of Records.

He was a giant that claimed has about 8'4 " height (even the Guinness Book of Records stated that he's only 7'4"). his weight are 356 pound (162 kg) and his shoe size was 27. he's d working as a circus giant on Great Lakes Exposition at Chicago, in 1936. He met a woman that will be his future wife, the woman's name are Jeanie Tomaini, she's born handicaped without a feet and her tall are only 2 feet 6 inchs (76 cm). he live on Florida.

Born on 1872 at Missouru. she's well known as the "Missouri Giant" She grows normally until the age of 7, because the lack of the literature so she doesn't listed on Guinness Book of Records.. Die in 1913 because of Tubercolose

Born in canada on 1881, he's a strong man and a star from barnum and baileys. he's the oldest from 20 brother's. at the age of 9 his height was 6 feet. his death certificate shows that he have 8'3 " height and still growing, as a strong man he was reported that he lift a 900 pound horse.. die on 1904 because of Tubercolose. 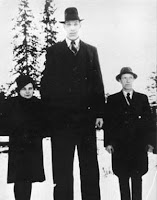 Myllyrinne born in finlandia on 1909, on the one side he's officially declared as the tallest human in the world, at the age of 21 his height are 7 feet and 3,5 inch. He grows abnormally and die on 1963, when he's die it reported that his height are 8 feet and 3 inch.

Born on 1897 in iowa USA. on 1918 he's got 8 feet tall, he reach 8 feet and 4 inch when he die on 1921 because of the heart illness and the glandular problems, he laid to rest on this hometown.. and an Extra Large coffin are specially made for him

That's the list of the world's most tallest man in the history.. but now in our world we have a man from china who was the world's tallest man.. and this is his picture


Thanks for reading this fact on the crazy world... I hope this post are useful for you to add your knowledge..
Share this article :
Labels: World's Tallest, Worlds Tallest