Posted by Unknown Posted on 7:19 AM with No comments
Still remember about the scary island of the dolls or the creepy toys which is posted before in Crazy World? we have another creepy doll stories here about Katja Doll from Russia.

Katja name was made in 1730 from one of the tsar mistress, it was told that the mistress was pregnant, like the other mistress dreams, this tsar mistress hope that she will gave birth a boy for the king, but unfortunately the mistress birth a defect girl baby. Then these baby was burned alive.

After these incident, the mother of a poor baby made a doll with the baby ash mixed with a porcelain and ceramics. 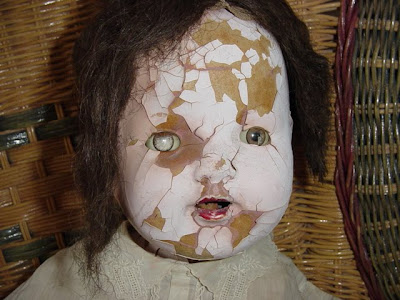 It was said that this Dolls are kept from generation to generation in Russia, and closely guarded. Allegedly because the doll can bring a curse, from newborn babies who suffer a fire burned.

Previously someone sell this dolls on ebay but his current thread was closed by ebay because ebay reported that there's so many weird incidents happen due to this mystical katja dolls.