Posted by Unknown Posted on 7:44 AM with No comments
It is because of the business sense demonstrated below.
An Indian walks into a New York City bank and asks to see theloan officer. He says he is going to Europe on business for two weeks andneeds to borrow $5,000.

The bank officer says the bank will need some kind of security for such aloan, so the man hands over the keys ofa new Rolls Royce parked on the street in front of the bank.Everything is checked out, and the bank agrees to accept thecar as collateral for the loan. An employee drives theRolls into the bank's underground garage and parks it there.

Two weeks later, the man returns, repays the $5,000 and theinterest, which comes to $15.41. The loan officersays, "We are very happy to have had your business, and thistransaction has worked out very nicely,but we are alittle puzzled. While you were away, we checked you out and foundthat you are a multimillionaire. What puzzles us is why would you botherto borrow $5,000?"

The Indian replied,” Where else in New York can I park my car for two weeksfor 15 bucks?"Cheers!

Another shot in the Cola wars

Posted by Unknown Posted on 7:08 AM with No comments 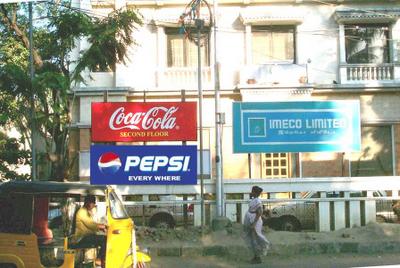 This is cool !!!!!! or is it a Master Piece Of Advertising Brainwork?
Take a look at this hoarding by Pepsi. This building is on TTK Road,Chennai. Coca Cola has taken 2nd floor for their sales & marketing office and have recently fixed a board. Two days later Pepsi put up a board on the same building where they have no retail outlet..!
Read more »
Labels: Ad wars..

Posted by Unknown Posted on 6:32 AM with No comments
Arthur Ashe, the legendary Wimbledon player was dying of AIDS. From world over, he received letters from his fans, one of which conveyed : "Why does GOD have to select you for such a bad disease"?

To this Arthur Ashe replied:

When I was holding a cup I never asked GOD "Why me?".

And today in pain I should not be asking GOD "Why me?"

Be thankful to GOD for 98% of good things in life
Read more »
Labels: Thoughts

Are you Fond of Honey ?

Posted by Unknown Posted on 11:29 PM with No comments
Why is HONEY golden in color?
A) Because of the Sun the flowers receive?
B) Because Flower Pollen is naturally Golden?
C) Because it's manufactured that way?
D) I don't know.

The answer may be found below.

I can see you,
You are not working and Just Checking mails!